After Janet Yellen was confirmed Federal Reserve Chair Person in February 2014, she quickly halted the Feds "Quantitative Easing" asset purchase programs. The effect of QE on stocks is visibly discernible in this FRED chart.


Options for stock investors - Pick one:

Yellen has been a dogmatic proponent of Income equality. She is very unlikely to restart QE. There is no chance congress does anything in an election year and earnings weakness has stock range-bound. You have to believe that the US economy is strong enough to accelerate in the midst of economic weakness across the rest of the planet to be positioned for bullish "risk on" trades right now.
Read more...
Holiday gatherings are a great time to gather with family and friends IF you are part of a semi-normal, functional extended family. Christmas Vacation is my favorite Christmas movie primarily because it thrusts the Griswold's array of dysfunctional characters into our faces.

This Christmas I have found an even more discombobulated cast of characters to introduce you too - The family of Government Economists that are supposed to be helping our economy improve. The heated internal argument between Fed Chair Janet Yellen and Alan Krueger, the former chair of Obama's Councel of Economic Advisors has spilled into the public arena. Hilary Clinton mentioned Krueger's support for her minimum wage increase during the second democratic debate so Yellen and Krueger share the same political ideology. Friendly fire enhances the entertainment value as their tiff grows.

First a bit of background. As our country emerged from the great recession the biggest puzzle has been reconciling the steady decline in the labor force participation rate with the narrative of a strong jobs market. after 6 years of "recovery" some fo these workers should be returning to the labor market and seeking jobs. The problem is it just isn't happening. Here's the reality: 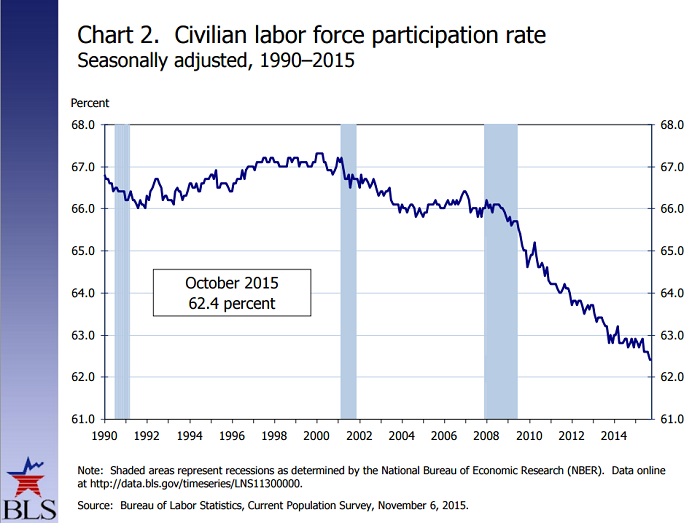 If you do the math, more than 94 million Americans are staying on the job market sidelines. Let's put that number into some perspective. The total population of Germany is only 80 million people and their country produces more than 3.7 trillion dollars of GDP each year. Our economy needs these folks to find the motivation to get back to work.

The debate over why these workers are on the couch is the source of the feud between Yellen and Krueger. Professor Krueger published a paper in March 2014 in which he concludes that those who have been out of the labor force are not likely to re-enter it. Yesterday Yellen publicly called out Krueger's assertion and this morning he wasted no time in jumping on CNBC to swing back and take a victory lap:


18 months after his paper was published, the labor force participation data supports Krueger's analysis. These folks are still on the sidelines and show no inclination of returning to work. I'll pick up the tab if these two want to go to dinner to discuss it:

For wonky asset managers (yours truly) the first Friday of the month is "Jobs Friday". The anticipation for this morning’s report was huge since this is the most meaningful statistic (after Personal Consumption Expenditures - PCE) that Janet Yellen and the Fed will get before they reconsider their interest rate stance. If Yellen follows the bond markets lead, she stay on hold for the foreseeable future.

No need to meet this month Janet. Instead of 200,000 jobs the report came in at 142,000 new jobs. Worker participation declined to match the 1977 low. The work week shrank and wages were flat. We are tempted to cheer that part-time positions jumped 53,000. This gain unfortunately came at the expense of full-time positions which declined 185,000 in the month.

The household version of the survey which includes self-employed workers and business owner actually showed a 236,000 job DECLINE in September. Harvard economics professor Greg Mankiw has an excellent description of the survey differences here.

The pundits who called for further positive revisions to previous reports are having humble pie for breakfast too. Last months jobs stinker was met by a chorus of cheerleaders who promised that, “August is usually revised higher!” Instead of an upward revision, August job gains were indeed revised-lower. The BLS cut 37,000 more jobs from the initial report of 173,000.

We expect the jobs report in November to get worse after the long list of announced layoffs are fully reflected. Stock futures are responding with red arrows in equities and green arrows on bonds. Please revisit your stock allocation in your 401K accounts. Stay tuned.