A strong start for equities

The year started with a bang for equity investors, as the Dow Jones Industrial Average experienced the best January in the past 14 years. It seemed that markets continued to react favorably to government stimulus, adding to the gains of the second half of last year. As a result, the S&P 500 Index returned 2.37 percent, and the DJIA climbed 2.85 percent over the month.

Thus far in 2011, among S&P 500 companies that have reported fourth-quarter earnings for 2010, 71 percent have beaten expectations. Corporate earnings were strong over the past year, but, during the first three quarters of 2010, top-line sales growth averaged only 0.67 percent. Earnings reports for the fourth quarter have been notable because revenues grew nearly 6 percent as a result of strong consumer spending.

Since the beginning of 2011, markets have not favored risk assets. Small-cap stocks have underperformed the large-caps, and emerging markets have solidly lagged the developed international indices. Overall, international markets have risen almost in lockstep with U.S. markets. The MSCI EAFE Index gained 2.36 percent in January, suggesting that investors were able to look beyond concerns over European debt and mounting unrest around the globe. But the MSCI Emerging Markets Index lost 2.81 percent, as investors contemplated discontent in Tunisia, Egypt, Algeria, Yemen, and Lebanon.

The situation in Egypt, where Egyptian citizens took to the streets in protest against their government, was the most widely reported. After a panicked selloff, Egypt’s stock exchange was closed for several days. Developed markets were quick to discount Egypt’s impact on the global economy, but they may be forced to reevaluate if the unrest escalates further or spreads.

Yields on the 10-year Treasury remained largely range-bound during January, hovering around the 3.35-percent level. Still, yields are roughly 1 percent higher than in mid-2010, so borrowing costs are higher for those looking for financing. For the month, the Barclays Capital Aggregate Bond Index was up slightly, posting a 0.12-percent return. The Federal Reserve upped the tempo of its quantitative easing (QE2) bond purchase program (see the chart below), despite generally positive economic data. Fed chairman Bernanke continued to be concerned about high unemployment and a slumping housing market. 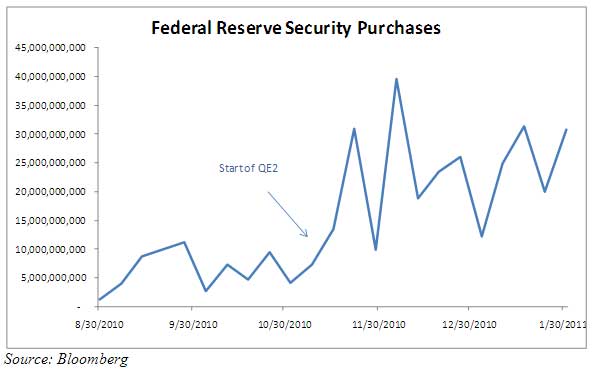 Economic recovery: believe it or not?

At an estimated 3.20-percent growth rate, U.S. gross domestic product for the fourth quarter of 2010 missed consensus expectations. With that said, the quality of the growth was better than anything we had seen previously during the recovery. Consumer spending accounted for a 2.26-percent contribution to growth, and net exports added 3.44 percent. Inventories fell, perhaps because companies were pleasantly surprised by the breadth of spending, which was the strongest in nearly five years. Meanwhile, the unemployment rate fell to 9.40 percent, and, for the first time since 1997, the manufacturing sector added more jobs than it eliminated.

A recent poll by the Fed of senior loan officers suggests that we could see better business-lending conditions in the coming year. Consumer confidence is the strongest it has been in eight months. In addition, a survey of analysts cited in the Wall Street Journal found that concerns about economic overheating are greater than fears of a double-dip.

Despite all this positive news, it’s important to keep things in perspective, as a number of major risks to the recovery are still evident. Housing prices have continued to fall, putting pressure on banks and homeowners. Unemployment is still well above levels seen during previous recoveries, and many economists believe that it will fall only slightly by year-end, to around 8.70 percent, because of reluctance on the part of companies to add workers. Moreover, consumers are a critical component to the recovery, and much of their recent spending has come from lowering personal savings rates. As a result, if consumers become less optimistic, this source of growth could quickly dry up and negatively impact GDP growth.

One of the biggest concerns as we look ahead in 2011 is the government stimulus that has supported much of the economic growth. The economy will need to become more self-sufficient if the government is to reduce both asset purchases and other spending. Given that this spending has surpassed even the level of spending done during implementation of the New Deal, this will be no easy task.

Return to politics as usual

U.S. politics have taken an interesting turn. The end of 2010 featured a surprisingly active lame duck session, during which Congress extended tax cuts and unemployment benefits, repealed Don’t Ask, Don’t Tell, and approved a nuclear arms treaty. When the New Year rolled around, it seemed that the new 112th Congress would work just as actively to repeal the exploits of its predecessor. Indeed, by mid-month, House Republicans had already voted to repeal the health care bill, a move that was largely symbolic, given that the Senate and White House are still held by the Democrats. It looks as if the current posture in Washington will remain bitterly partisan, and it will be interesting to see whether this does indeed lead to gridlock.

After experiencing a nearly 2-percent selloff on the peak day of protests in Egypt, equity investors proved fairly resilient. Although this is generally perceived as a good sign for the bulls, it could signify an overly optimistic attitude that might hurt investors if they are not careful.

Currently, most signs point to a slow and steady economic recovery, but it’s worth remembering that the beginning of 2010 also looked hopeful, before the markets experienced a brief but very real selloff going into the middle of the year. Long-term investment opportunities still abound, but we shouldn’t be surprised by some ups and downs in the near term.

Disclosure: Certain sections of this commentary contain forward-looking statements that are based on our reasonable expectations, estimates, projections, and assumptions. Forward-looking statements are not guarantees of future performance and involve certain risks and uncertainties, which are difficult to predict. Past performance is not indicative of future results. All indices are unmanaged and investors cannot invest directly into an index. The Dow Jones Industrial Average is a price-weighted average of 30 actively traded blue-chip stocks. The S&P 500 Index is a broad-based measurement of changes in stock market conditions based on the average performance of 500 widely held common stocks. The MSCI EAFE Index is a float-adjusted market capitalization index designed to measure developed market equity performance, excluding the U.S. and Canada. The MSCI Emerging Markets Free Index is a market capitalization-weighted index composed of companies representative of the market structure of 26 emerging market countries in Europe, Latin America, and the Pacific Basin. It excludes closed markets and those shares in otherwise free markets that are not purchasable by foreigners. The Barclays Capital Aggregate Bond Index is an unmanaged market value-weighted index representing securities that are SEC-registered, taxable, and dollar-denominated. It covers the U.S. investment-grade fixed-rate bond market, with index components for a combination of the Barclays Capital government and corporate securities, mortgage-backed pass-through securities, and asset-backed securities.

previous
Auld Lang Syne—for the Sake of Old “Financial” Times
next
Austerity: Coming soon to a town near you