International investors saw gains during the quarter as well, though international markets weren’t able to keep pace with the U.S. The MSCI EAFE Index returned 3.37 percent for the quarter, slowed by a 2.24-percent decline in March. Added volatility overseas left the MSCI Emerging Markets Index up only 1.69 percent, despite a 5.70-percent gain in March.

Bonds were additive to investor portfolios during the quarter. The Barclays Capital Aggregate Bond Index gained a modest 0.42 percent. Investors showed an appetite for riskier fixed income assets, demonstrated by the Barclays Capital High Yield Bond Index’s 1.65-percent gain for the quarter. Companies have built strong balance sheets and appear to be in good financial health. Refinancing activity has helped push down borrowing costs and made corporate and high-yield bonds appear more attractive. Although gains in those asset classes have brought pricing more in line with longer-term historical averages, they can still offer attractive coupons when compared with Treasuries. 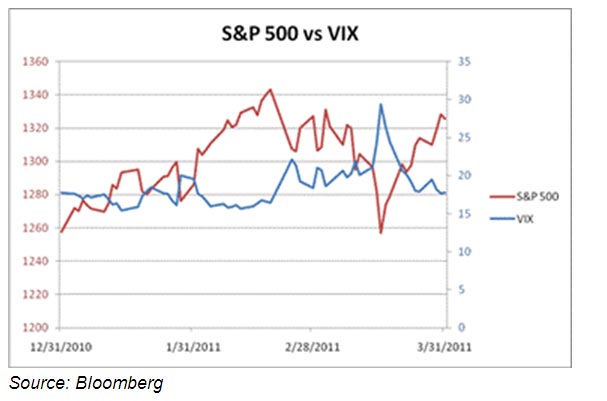 Continued unrest in the Middle East and North Africa

Unfolding turmoil in North Africa and the Middle East dominated headlines over much of the quarter. What began as civil unrest in Tunisia eventually spread across North Africa and the Middle East. The result, to date, has been regime change in Tunisia and Egypt and international intervention in Libya. Turbulence across the region hasn’t subsided; instead, protests have spread and become more violent.

Thus far, global financial markets have weathered the unrest, although at times we have seen selloffs overseas and downward pressure in the U.S. Investor confidence remains intact, however, and domestic markets have recovered much of their modest losses. The biggest impact of the unrest has been on oil prices, which have pushed above $100 per barrel—a level not seen since October 2008. In addition, during the quarter, the energy sector as a whole has staged an impressive rally.

The increase in oil prices has been exacerbated by the escalation of hostilities in Libya. The threat of indiscriminate violence toward Libyan civilians prompted the Arab League to request international intervention. President Barack Obama, working with the United Nations and NATO, initiated military action and imposed a no-fly zone over the troubled nation; however, at quarter-end, the Libyan conflict was far from over, with Colonel Gaddafi still clinging to power in the western part of the country.

Meanwhile, turmoil in Bahrain has raised some concerns because of its proximity to Saudi Arabia. Saudi Arabia is the third-largest per-country producer of oil, so social upheaval there could cause additional speculative spikes in oil prices and weaken consumer confidence in the U.S. and abroad.

The economy at home: diverging paths

As we look back on economic developments over the quarter, we see a wide divergence among three important segments of the economy. On the bottom, housing has continued to drag. Housing starts have fallen to 479,000, as of the most recent reading in February, the lowest since April 2009. In addition, home prices, which lag other indicators, slipped 0.30 percent in January, compounding a 1-percent price decline from the month before.

Seasonally adjusted new home sales have continued to decline, dropping to their lowest level since recordkeeping began in 1963. On the plus side, this level of new home sales appears unsustainable, and a reversion to more normal levels over the long run seems likely to us. In the short run, we hope that better weather in the spring will bring some renewed housing demand.

In the middle of the spectrum, the employment situation has shown signs of turning around. Initial jobless claims, continuing a downward trend that began last August, have begun to consistently report below 400,000. Since 1980, claims have averaged around 384,000 per week, and claims as of the end of March were right in line with that average. Since the beginning of this year, the unemployment rate has fallen from December’s 9.40 percent to 8.80 percent at the end of March.

With the goal of improving earnings, companies have continued to vacillate regarding their hiring decisions—between the desire to boost top-line revenues by adding workers and the opposing impulse to keep cash on balance sheets and cut costs. The decreased levels of jobless claims have led us to believe that many firms may be shifting away from the latter and perhaps toward the former.

Finally, U.S. manufacturing has been making a robust recovery. The most notable recent data point has been the Philadelphia Fed Manufacturing survey, which rose to 43.4 in March. To put this in perspective, manufacturers in Pennsylvania and New Jersey are reporting the best conditions for growth since 1984. In addition, nationwide, ISM Manufacturing hit 61.4 in February, which ties a May 2004 high and was last surpassed in 1983. Unemployment in manufacturing has fallen from highs of 12.60 percent in 2009 to 9.70 percent today.

Although capacity utilization has still been lower than average, and durable goods orders have been volatile, the ISM and Philadelphia Fed surveys point to higher future capacity usage and lower future unemployment—as long as rising commodity prices don’t hamper growth. The positive manufacturing data also helps explain the success of industrials stocks over the past three months.

It is still early in the year, and as such we would be remiss if we did not mention several major themes that we see on the investment horizon. A major focus for investors is the economy and the impact that this slow and sluggish recovery is having on Americans. There are indeed pockets of strength, but, with stimulus spending winding down and a focus on discretionary spending cuts in Congress, we think the government will soon withdraw much of its support from the recovery. Given the mixed signals from the private sector, it seems likely to us that we could experience this “muddling along” economy for quite some time. Housing remains sluggish, and higher oil and commodity prices may also hamper the recovery across the globe.

The U.S. has also become a debtor nation, with ballooning deficit spending funded by mounting debt levels. This, coupled with high oil prices denominated in U.S. dollars, could apply downward pressure on the U.S. dollar in 2011. The European debt situation could also resurface if austerity measures fall short of expectations. Moreover, it is worth reminding investors of our year-end 2010 remark that markets can be affected by unanticipated events rather than by those that are evident and predictable.

The tragedy in Japan has been a disruption to financial markets and is a good example of an unanticipated event. But the Japanese government and its people can now begin the rebuilding process. In the near term, business interruptions will persist and demand for oil and natural gas could rise, though the long-term global economic impact of the disaster should be contained.

Despite a plethora of concerns, it is difficult to bet against the resiliency of the American economy. Markets have remained strong, investors have been showing signs of confidence, and current valuations have appeared to be commensurate with a continued global recovery. Although investors should be aware of potential risks, they should also keep in mind that markets can sometimes climb even in the face of a wall of worry.

Disclosure: Certain sections of this commentary contain forward-looking statements that are based on our reasonable expectations, estimates, projections, and assumptions. Forward-looking statements are not guarantees of future performance and involve certain risks and uncertainties, which are difficult to predict. Past performance is not indicative of future results. All indices are unmanaged and investors cannot invest directly into an index. The Dow Jones Industrial Average is a price-weighted average of 30 actively traded blue-chip stocks. The S&P 500 Index is a broad-based measurement of changes in stock market conditions based on the average performance of 500 widely held common stocks. The MSCI EAFE Index is a float-adjusted market capitalization index designed to measure developed market equity performance, excluding the U.S. and Canada. The MSCI Emerging Markets Free Index is a market capitalization-weighted index composed of companies representative of the market structure of 26 emerging market countries in Europe, Latin America, and the Pacific Basin. It excludes closed markets and those shares in otherwise free markets that are not purchasable by foreigners. The Barclays Capital Aggregate Bond Index is an unmanaged market value-weighted index representing securities that are SEC-registered, taxable, and dollar-denominated. It covers the U.S. investment-grade fixed-rate bond market, with index components for a combination of the Barclays Capital government and corporate securities, mortgage-backed pass-through securities, and asset-backed securities. The Barclays Capital U.S. Corporate High Yield Index covers the USD-denominated, non-investment-grade, fixed-rate, taxable corporate bond market. Securities are classified as high-yield if the middle rating of Moody’s, Fitch, and S&P is Ba1/BB+/BB+ or below.

previous
Do as I say, not as I do
next
The Budget Battle Begins