Investors in international markets also saw positive returns. The MSCI EAFE Index returned 5.98 percent in dollar terms for the month. Gains for U.S. investors came mostly from currency fluctuations. The greenback lost 4.23 percent against the euro in April and has fallen 10.63 percent this year. While European investors in the EAFE index have lost money year-to-date, U.S. investors in the index have gained 9.54 percent—mostly as a result of currency appreciation. The weakening dollar has also benefited U.S. exporters, who experienced gains when overseas profits were translated back into dollars. The MSCI Emerging Markets Free Index returned 2.83 percent in April and has gained 4.57 percent year-to-date. Similarly, U.S. investors in emerging markets saw the bulk of their gains from the impact of a weaker dollar.

Fixed income investors also saw gains across multiple sectors, as most major bond indices moved higher over the month. Interest rates eased lower, and prices rose, as continued buying by the Federal Reserve (the Fed) helped support bonds. As a result, the Barclays Capital Aggregate Bond Index increased 1.27 percent in April and is up 1.70 percent year-to-date. Municipal bonds also have gained, after having been badly beaten down at the end of last year and beginning of this year. The Barclays Capital Municipal Bond Index gained 1.79 percent in April and is up 2.31 percent since January 1.

Anticipating the end of QE2

As we move toward midyear, the market is again focusing on the Fed and the end of its second quantitative easing program (QE2) in June. Although the Fed will still be an active buyer of domestic debt, its volume of purchases will decline dramatically when it completes its current $600 billion commitment to the program (see Figure 1). Many market observers anticipate that interest rates will push higher as buying declines; however, the current reduction in 10-year Treasury yields may actually suggest the opposite. 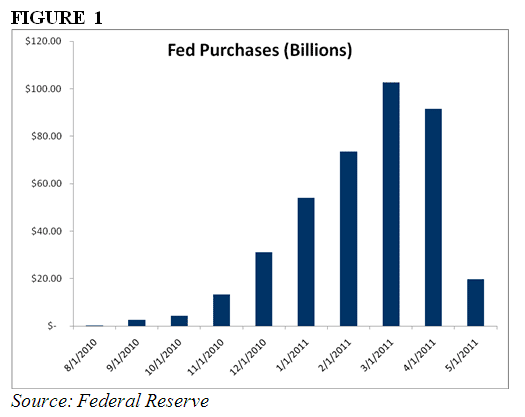 The end of QE2 may also affect equity markets, given that markets have moved higher in lockstep with the Fed’s security purchases. One potential result could be heightened volatility, particularly if equity markets stall at current levels. There is also significant concern over the potential for the end of QE2 to exert negative pressure on markets. Although unlikely, the Fed could still take further measures to stem market losses should they occur.

The economy continues to chug along, as debt worries persist

By many metrics, the U.S. economic recovery has been delayed or at least slowed in 2011. After increasing 3.10 percent in the fourth quarter of 2010, gross domestic product (GDP) grew only 1.80 percent annualized in the first quarter of this year. Consumer spending and inventory restocking were the largest contributors to growth, but reduced government spending shaved more than one percentage point off GDP. In his first formal press conference, Fed Chairman Ben Bernanke blamed the slowdown on “transitory” factors, such as defense spending, weather, and exports. In the second quarter, reduced spending by individual states and higher oil prices could remain headwinds.

A few signs of inflation have cropped up, particularly in prices paid by producers of goods. This has resulted in a slight slowing of the extremely robust growth in the manufacturing sector; the April Institute for Supply Management report lost some steam, and some regional manufacturing indices have also slowed. While oil prices have put upward pressure on input prices, an unemployment rate of 8.80 percent and a weak housing market reduce the likelihood of sustained inflation in the U.S.

The European Central Bank (ECB) raised interest rates to 1.25 percent in April, following the lead of many emerging markets nations, which have been aggressively raising rates to combat inflation. The ECB’s hike leaves the U.S. as one of the few countries actively continuing to ease monetary policy. Japan and Switzerland are the only other major countries offering rates at or below 0.25 percent; Brazil and China, for example, have set nominal interest rates at 11.75 percent and 6.31 percent, respectively.

The European debt situation is still worth monitoring, even though it has had little to no impact on markets recently. It seems likely that Greece will default or need additional bailouts. Interest rates on its 2-year paper recently shot up to more than 24 percent, signaling a likely default, unless the country receives assistance or can reschedule debt payments. This situation has proved divisive among eurozone nations, as anti-bailout sentiment has grown. It also has renewed concerns that Ireland and Portugal may soon need additional help.

Easing into the second half of the year

The biggest risks moving into the second half of the year are the role of government and the withdrawal of stimulus. This may add to market volatility, as the economy adjusts to the new environment. But the economy has shown resilience, and investor confidence remains fairly high. This should continue to help support markets, although, as always, markets may fluctuate in anticipation of future events.

Disclosure: Certain sections of this commentary contain forward-looking statements that are based on our reasonable expectations, estimates, projections, and assumptions. Forward-looking statements are not guarantees of future performance and involve certain risks and uncertainties, which are difficult to predict. Past performance is not indicative of future results. All indices are unmanaged and investors cannot invest directly into an index. The Dow Jones Industrial Average is a price-weighted average of 30 actively traded blue-chip stocks. The S&P 500 Index is a broad-based measurement of changes in stock market conditions based on the average performance of 500 widely held common stocks. The MSCI EAFE Index is a float-adjusted market capitalization index designed to measure developed market equity performance, excluding the U.S. and Canada. The MSCI Emerging Markets Free Index is a market capitalization-weighted index composed of companies representative of the market structure of 26 emerging market countries in Europe, Latin America, and the Pacific Basin. It excludes closed markets and those shares in otherwise free markets that are not purchasable by foreigners. The Barclays Capital Aggregate Bond Index is an unmanaged market value-weighted index representing securities that are SEC-registered, taxable, and dollar-denominated. It covers the U.S. investment-grade fixed-rate bond market, with index components for a combination of the Barclays Capital government and corporate securities, mortgage-backed pass-through securities, and asset-backed securities. The Barclays Capital Municipal Bond Index includes investment-grade, tax-exempt, and fixed-rate bonds with long-term maturities (greater than two years) selected from issues larger than $50 million