Another volatile year for investors

Markets ended 2011 on a strong note, after what had been a volatile year by historical standards. Domestic equity markets were helped by strong gains in the fourth quarter but still ended the year only modestly higher than they were last January. Despite lackluster returns, markets fluctuated widely during the year and tested the resolve of many investors.

Looking across asset classes, there was a considerable dispersion of return this past year. For equity investors, bright spots mostly came from defensive sectors. Utilities posted a total return of 19.73 percent, and consumer staples returned 13.93 percent for the year, according to Morningstar®/S&P data. Conversely, financials had a rough year, losing 17.09 percent on worries over eurozone debt troubles. In general, large-cap stocks tended to outperform small-cap stocks and growth outperformed value.

Surprisingly, the best-performing asset class in 2011 was long-term U.S. Treasuries, which gained almost 30 percent, according to the Barclays Capital U.S. Treasury Long Total Return Index. Real estate investment trusts also returned a respectable 8.48 percent for the year, as represented by the S&P U.S. REIT Index. Gold continued to be a good portfolio diversifier, rising in price from $1,412 per ounce to $1,572 per ounce for the year, according to Bloomberg. On the flipside, international stocks underperformed significantly for the year, especially in the financials sector.

Headlines both domestic and abroad drove the majority of market volatility in 2011, creating a risk-on/risk-off environment. When the dust settled, the Dow Jones Industrial Average had posted an 8.38-percent total return for the year, benefiting greatly from a fourth-quarter gain of 12.78 percent. The S&P 500, with dividends reinvested, returned 2.11 percent, as its heavy weighting in financials hurt performance relative to the Dow. The S&P 500’s fourth-quarter gain of 11.82 percent managed to push it above breakeven on an annual basis (see chart). 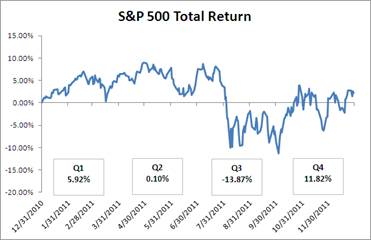 While domestic stocks benefited from fourth-quarter gains, international stocks were not so fortunate. The MSCI EAFE Index was up a modest 3.33 percent in the fourth quarter, leaving it down 12.14 percent for the year. Riskier emerging markets stocks fell further, as the risk-off trade drove them lower. For the fourth quarter, the MSCI Emerging Markets Index gained 4.08 percent but still lost a price return of 20.41 percent for the year.

It seems that unless they concentrated their portfolio in long-duration Treasuries, investors faced a strong headwind in the fixed income space. The Barclays Capital U.S. Aggregate Bond Index returned 7.84 percent for the year, helped in large part by its Treasury exposure. The riskier Barclays Capital U.S. Corporate High Yield Index performed less well.

Unfortunately, many bond managers fell short of the aggregate index, having come into 2011 with a short-duration, underweight Treasuries bias. Their expectation that rates would rise on inflation and growth proved unfounded. Instead, renewed fears of weak global growth, high debt levels, and intervention by the Federal Reserve (the Fed) caused a rally in long-duration Treasuries.

Last year, we closed our market update with this statement, “It’s the risks that people aren’t expecting that could cause the strongest market reactions.” Sure enough, markets in 2011 were rocked by numerous unforeseen events. In particular, the Japanese earthquake and unrest in the Middle East come to mind.

Here in the U.S., ongoing debate in Washington over the debt ceiling, as well as renewed fears of recession, contributed to a single-day plunge in the Dow of 512 points in August. The subsequent S&P downgrade of U.S. debt saw the Dow trade 635 points lower on its first trading day after the announcement. It also became clear last summer that Europe would fall victim to its own mounting debt problems, which weighed heavily on markets late in the year.

The U.S. Fed announced Operation Twist in September, decreasing yields on the long end of the curve with the goal of supporting the housing sector and ultimately economic growth. Central banks around the world also intervened in currency markets in November, in a concerted effort to provide liquidity and bolster confidence in financial markets. Policy interventions have provided short-term support for markets, but these actions may be less helpful in the long run.

The U.S. economy grinding along, but global growth a concern

While remaining weaker than its long-term trend, U.S. gross domestic product (GDP) still managed to expand in 2011, at an estimated rate of 1.8 percent in real terms. Economic growth appeared to pick up slightly in the second half of the year, as the negative effects of the Japanese earthquake faded.

Home prices continued to fall in 2011. Manufacturing and industrial production growth also slowed but still moved in a positive direction.

The most encouraging development last year was a decrease in the unemployment rate, from 9.4 percent to 8.6 percent, the lowest it has been since the beginning of 2009. Changes in the employment situation tend to lag the overall economy and shouldn’t be interpreted as predictive of future economic growth. That said, an increase in the number of working Americans may help boost consumer confidence and spending.

The biggest threat to continued U.S. growth may come from overseas. According to Bloomberg, the consensus among economists is for eurozone GDP to contract 0.2 percent in 2012, as many European countries fall into recession. (If this occurs, austerity measures will likely be to blame.)
Because the U.S. engages in roughly three times as much trade with Europe as it does with Japan, a slowdown in Europe could have a significantly larger direct impact on our domestic economy than did the recent recession in Japan. Despite this concern, consensus expectations are for U.S. GDP to grow 2.1 percent in 2012.

Looking ahead into 2012, we are bound to see an increased focus on domestic politics with the coming of the presidential election cycle. So far, Republican candidates have focused mainly on attacking one another. This will change in the coming year, and differences between Republicans and Democrats on subjects such as entitlement spending and tax levels will once again come to the forefront. Market participants will watch the debate carefully and may react differently depending on which party controls Congress and the White House after the election.

The European debt situation may soon intensify. Italy needs to refinance approximately €118 billion in bonds in the first quarter, according to some estimates. This may represent more than 20 percent of the nation’s estimated funding needs for 2012 through 2014. The bond sales will likely test investor willingness to continue lending to the debt-plagued nation and to European peripherals as well.

For many investors, finding positive returns was challenging in 2011, while finding volatility was far too easy. Yet this is the start of a new year, and last year’s winners and losers may perform differently going forward. Portfolio changes at this time should be more of an adjustment to long-term planning goals rather than an attempt to chase past performance.

Disclosure: Certain sections of this commentary contain forward-looking statements that are based on our reasonable expectations, estimates, projections, and assumptions. Forward-looking statements are not guarantees of future performance and involve certain risks and uncertainties, which are difficult to predict. Past performance is not indicative of future results. Diversification does not assure a profit or protect against loss in declining markets. All indices are unmanaged and investors cannot invest directly into an index. Barclays Capital U.S. Treasury Long Total Return Index includes fixed income securities issued by the U.S. Treasury (not including inflation-protected bonds) and U.S. government agencies and instrumentalities, as well as corporate or dollar-denominated foreign debt guaranteed by the U.S. government, with maturities greater than 10 years. The S&P U.S. REIT Index measures the securitized U.S. REIT market, covering approximately 89 percent of the U.S. REIT market capitalization and maintaining a constituency that reflects the market’s overall composition. The Dow Jones Industrial Average is a price-weighted average of 30 actively traded blue-chip stocks. The S&P 500 Index is a broad-based measurement of changes in stock market conditions based on the average performance of 500 widely held common stocks. The MSCI EAFE Index is a float-adjusted market capitalization index designed to measure developed market equity performance, excluding the U.S. and Canada. The MSCI Emerging Markets Free Index is a market capitalization-weighted index composed of companies representative of the market structure of 26 emerging market countries in Europe, Latin America, and the Pacific Basin. It excludes closed markets and those shares in otherwise free markets that are not purchasable by foreigners. The Barclays Capital Aggregate Bond Index is an unmanaged market value-weighted index representing securities that are SEC-registered, taxable, and dollar-denominated. It covers the U.S. investment-grade fixed-rate bond market, with index components for a combination of the Barclays Capital government and corporate securities, mortgage-backed pass-through securities, and asset-backed securities. The Barclays Capital U.S. Corporate High Yield Index covers the USD-denominated, non-investment-grade, fixed-rate, taxable corporate bond market. Securities are classified as high-yield if the middle rating of Moody’s, Fitch, and S&P is Ba1/BB+/BB+ or below. The Barclays Capital Municipal Bond Index includes investment-grade, tax-exempt, and fixed-rate bonds with long-term maturities (greater than two years) selected from issues larger than $50 million.