The markets cheered the June jobs report on July 5th as the economy created 195,000 jobs and revised previous month’s numbers upward. As I wrote in our column in May, the economy is slowly creating jobs, but at this rate will take until March 2022 to get back to pre-recession levels.  To further compound this problem, temporary positions (those without benefits and insurance) have accounted for more jobs than any other sector since the Recession began.

According the Associated Press, 2.7 million temp jobs have been created in the past four years. Out of the 6.2 million job total since 2008, temp positions have accounted for 41%!  It’s not surprising then that the majority of jobs created are lower wage positions compared to the pre-recession levels. This chart from www.nelp.org shows the wage disparity in recent job creation: 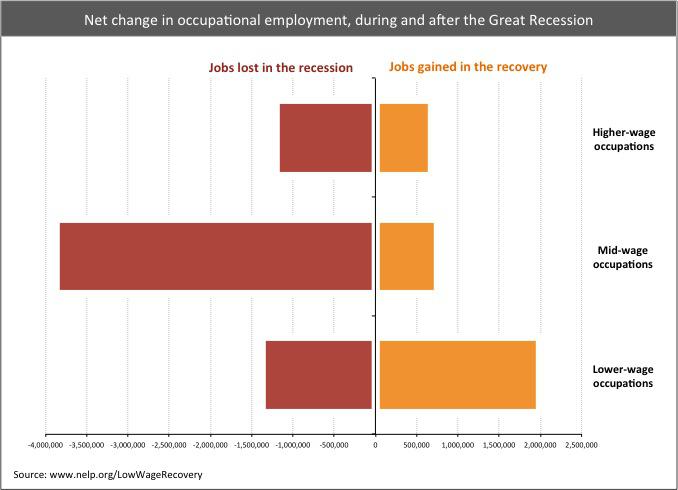 The majority of jobs lost in the recession were middle class jobs.  Since the recovery began, less than 30% of those jobs have been replaced.  However, more lower wage jobs have been created than were lost in the past four years. People want to work and are willing to accept lower pay to have a job. In addition to these lower wages, workers also face the 2% payroll tax that came back in 2013. Further, the Department of Defense began their furlough program this week, reducing wages by 20% for 650,000 workers over the next three months.  For a worker making $50,000, this eleven week reduction in hours worked, results in 4.2% of their salary, or $2,115.

Finally, in that same April blog post I referenced Regal Cinemas and other companies reducing worker hours to avoid upcoming penalties surrounding the upcoming Obamacare law changes. According to the UC Berkeley Labor Center, 2.3 million workers face reduced hours due to the health care law later this year. Those workers coupled with the 650,000 Department of Defense workers, total almost 3 million workers that presumably have benefits.

Job growth is anemic, the majority of jobs we are creating aren’t permanent, are paying less than they were five years ago, and we can look to reduce hours for up to 3 million workers. The equity markets continue to rally on assumptions that the Fed will continue its quantitative easing program. But what happens to equity prices when the data show a different reality when it comes to the labor market?

previous
Maintaining Your Investing Discipline (When Others Aren’t)
next
Back to School Time Already?