Let’s role play the part of a billionaire investor and see how good you would be at it. Here is the scenario: You own 61.5 million shares of this stock trading at $93. That puts your stake at 5.7 billion dollars. It’s an oil stock and in just the last two months it drops from $93 to $79/share. Your paper loss would be somewhere around 860 million dollars.

The outlook calls for oil to continue to drop and global supplies are growing each day.  You’re a billionaire so you could buy more if you wanted to. The wait for a turnaround won’t be immediate. What do you do?

Do not dwell in the past, sell, cut your losses and look for something better.

Despite being down, buy more shares now and even more if it goes lower.

Keep what you have but dont add anymore to a losing position. 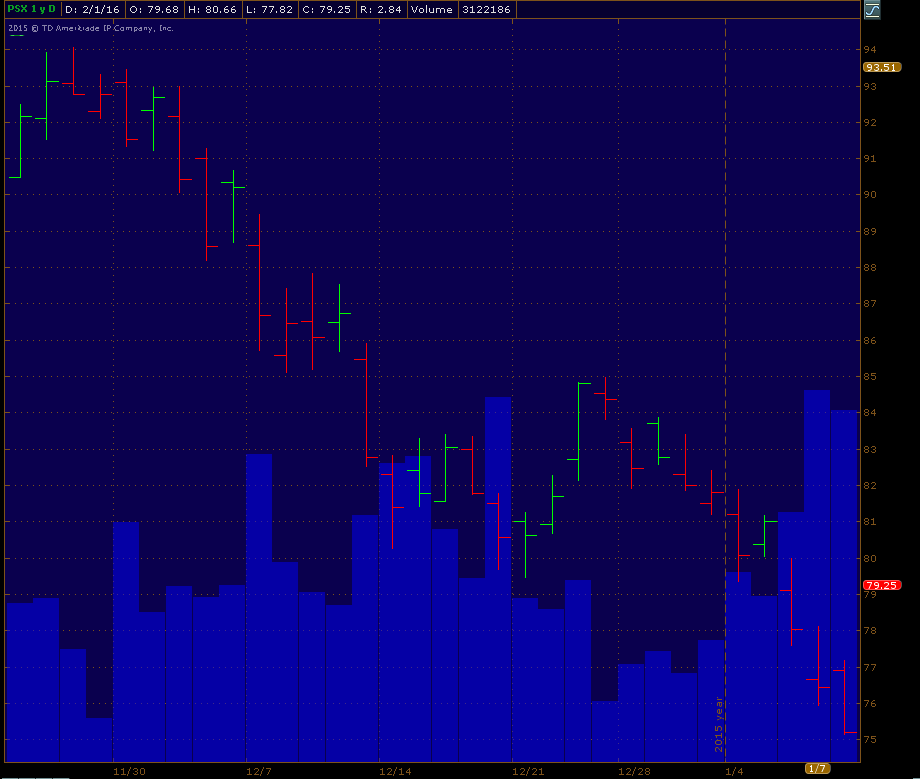 Warren Buffett’s company, Berkshire Hathaway owns this stock. Do you want to compare your decision with Buffett? He bought 759,000 more shares on January 6th when the stock closed at $78. The next day the stock dropped to $76, adding another 124 million dollars to a paper loss that is now almost one billion dollars on the whole position. What would you do at this point? How would you handle losing a billion dollars in a couple of months?

Buffett bought twice as much on the 7th when it dropped again. It dropped to $75 on the 8th. He bought another 1.74 million shares. He didn’t let the immediate pain of losing a billion dollars in 2 months cloud his judgement about the long term opportunity. He was following his own well-rehearsed advice. He was being “greedy when others were fearful”. Here’s the chart of his continued purchases in January as oil stocks were getting hammered.

You may be tempted to reply that it’s easier for billionaires to invest like this since they have such deep pockets and are in charge. Realize that Buffetts company stock, Berkshire Hathaway was also down 15% last year and his personal stake of 350,000 shares in the company dropped over 12 billion dollars!

The lesson for mere mortals is a behavioral one. Buffett has mastered the fear that prompts rash decisions. He uses situations where other investors are capitulating to their fears as an opportunity to buy solid long term assets “on sale”. To mimic his approach you will have to divorce your investment decision making from the emotions of near term moves which is easier said than done.