Trump and Clinton are getting all the press but the biggest threat to the middle class is made of steel, works 24/7 without a break and no healthcare or retirement benefits. Meet your new co-worker and he wants your job: 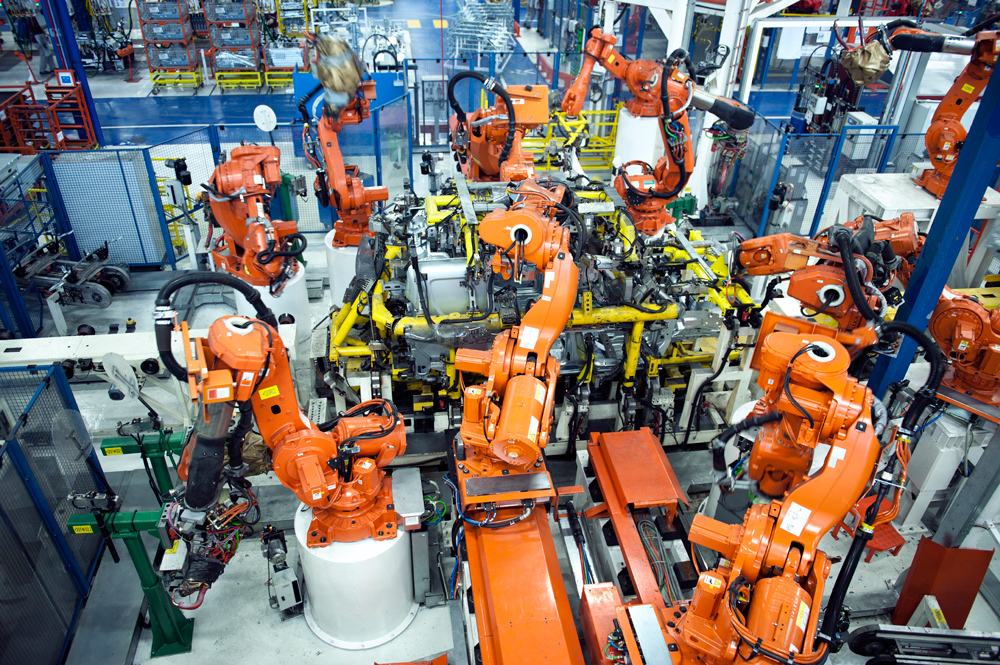 This data series from the St Louis Federal Reserve is worth unpacking:

This chart depicts the long-term relationship between Industrial capacity utilization and employment. The divergence in the data series over the last two years is significant and deserves analysis. Lately, manufacturers have reduced the resources required to produce their products. This would normally be accompanied by a decline in employment. Fed economist Ana Maria Santacreau makes several observations about the trends. First on the post-recession gap in capacity utilization and employment:

[panel] [heading size=”h3″ style=”underline”]Reasons why unemployment took longer to recover following the recessions of the early 1990s and early 2000s:[/heading]

In a recession companies cut headcount. It’s the fastest way to dramatically reduce cost and survive the downturn. Widespread economic problems also provide “political cover” to fire people since every business sector reacts to the same pain point. As the recession troughs and businesses see an uptick in their fortunes, they face a crucial decision. Should they re-hire employees, who may be even more costly to carry (regulation, Obamacare etc…) and harder to fire in the future? Could they afford the capital outlay to replace workers with automated processes, with robots.

The recession of 2008-2009 was different in that many workers who were forced to the sidelines decided to stay there. When businesses started to ramp up production, the low interest rate era wrought by the Federal Reserve’s QE policies made it cheaper than ever for them to finance their transition from a human workforce to a robotic workforce.

Santacreau observed, “Capacity seems to be mainly affected by cyclical factors. Employment, however, is also affected by a structural factor that makes it adjust more slowly than industrial capacity adjusts to recessions and recoveries.”

The rise of income inequality since the recession ended in 2009 was a by-product of the Fed’s easy money. It helped big business CFOs fix their corporate balance sheets so they could afford to hire more workers and grow the economy. Instead, manufacturing CFOs used the cash to invest in robotics. Their robotic workforce is more elastic (no demand, no big deal, just unplug the robot) and immune from government regulations and employment cost inflation. Robots are easier on the corporate budget than humans.

If you are a knowledge worker (jobs that require creative thinking to solve complex problems) you may be feeling a bit smug as factory workers fight this trend. That would be a mistake. The robot that takes your job won’t be a steel and hydraulic behemoth. It will be a rack of servers running software to automate most of the decisions that knowledge workers parse. Make no mistake, in the future machines will be responsible for most of our GDP. We are responsible for the transition. The new thought exercise for Venture Capitalist in Silicon Valley is called “Last Job”– i.e. what’s left for people when robots take over.

previous
Simple Advice That is Hard to Follow
next
Tax Internship