The September gains moved both major U.S. indices back into the black for 2010, as the DJIA is up 5.57 percent and the S&P has gained 3.89 percent year-to-date. Markets reacted favorably to further speculation that the economy would not slide back into recession. Although recent economic data has been weak, the reduced threat of a double-dip recession put many market participants at ease.

In the commodities space, investors continued to demonstrate an insatiable appetite for gold, based on concerns over currency devaluations and the potential threat of future inflation. In late September, gold closed above $1,300 an ounce for the first time ever, and investor interest went unabated. The spot price of gold, as indicated in Figure 1, has increased 18.91 percent year-to-date. 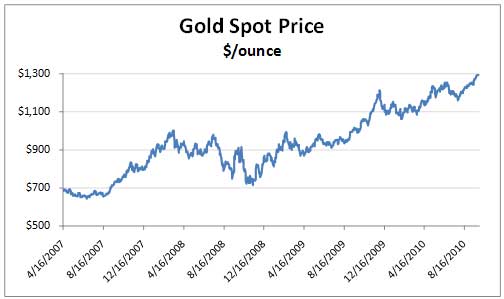 Flows into fixed income continued at a record-setting rate throughout the third quarter, helping to support bond prices, while equity flows have been negative for six of the last nine months.

Over the quarter, fixed income assets added to portfolio returns, though in September results were less than inspiring. The Barclays Capital Aggregate Bond Index gained only 11 basis points (0.11 percent) for the month, but it returned 2.48 percent for the quarter, which helped lead to a 7.94-percent gain year-to-date. September was the sixth straight month of positive returns for the broad U.S. bond index. High-yield bonds rallied in September, returning 3.01 percent and contributing to an 11.53-percent gain year-to-date, as reflected in the Barclays Capital U.S. Corporate High Yield Index.

The Federal Reserve has been a major catalyst for this recovery, and it seems that it is not content to sit on the sidelines. Fed chairman Ben Bernanke has all but announced that he will engage in a second round of quantitative easing—some observers have termed it QE2—if market conditions warrant.

Concerned about the weak economy and deflationary pressures, Mr. Bernanke might look to inject liquidity into the market to help support the recovery. Although there has been some dissent among members of the Federal Open Market Committee, it appears that Mr. Bernanke will have the support he needs for QE2.

Both equity and fixed income markets reacted favorably to the QE2 announcement, believing that the Fed’s action would be supportive of the financial markets.

The recession is over, so where is the growth?

But, to many, it certainly doesn’t feel as if the recession is over—especially with unemployment stuck at 9.60 percent and the loss of more than 7.3 million jobs since the economic downturn began. Job creation has been a stumbling block for this recovery, and, despite federal government efforts, companies have been hesitant to add workers to payrolls.

The recovery has apparently stalled, as the impact from the massive stimulus bill has lessened. Although we experienced 5-percent annualized growth in gross domestic product for the fourth quarter of 2009, growth has slowed over the past two quarters. A revised estimate now puts GDP growth for the second quarter of 2010 at 1.70 percent.

Although GDP growth has been below the historical trend for previous recoveries, it will likely be sufficient to stave off a double-dip recession. Still, it is not robust enough to support the notion of a strong recovery, and, with lingering unemployment and below-trend economic growth, we could be faced with a sluggish economy, at best, for the foreseeable future. The economy and markets may just have to “muddle through” until growth can become more self-sustaining.

The obvious question then becomes, “What do we do as we wait for employment to increase and economic growth to rise to levels more indicative of a recovery?” One theme we have emphasized is to incorporate an income approach in portfolios, so that investors “get paid to wait.” Generating ongoing income can help bolster returns and potentially lower overall portfolio volatility.

Additionally, investors must maintain a continued focus on Fed actions. The notion of QE2 seemed well-received by markets, and we may see favorable reaction if the Fed follows through with another quantitative easing program.

But investors must also keep a keen eye on risk, despite the strong markets we saw in September. With elections around the corner and changes afoot in Washington, it would not surprise us to see the return of market volatility as we move forward.

Disclosure: Certain sections of this commentary contain forward-looking statements that are based on our reasonable expectations, estimates, projections, and assumptions. Forward-looking statements are not guarantees of future performance and involve certain risks and uncertainties, which are difficult to predict. Past performance is not indicative of future results. All indices are unmanaged and investors cannot invest directly into an index. The Dow Jones Industrial Average is a price-weighted average of 30 actively traded blue-chip stocks. The S&P 500 Index is a broad-based measurement of changes in stock market conditions based on the average performance of 500 widely held common stocks. The MSCI EAFE Index is a float-adjusted market capitalization index designed to measure developed market equity performance, excluding the U.S. and Canada. The MSCI Emerging Markets Index is a market capitalization-weighted index composed of companies representative of the market structure of 26 emerging market countries in Europe, Latin America, and the Pacific Basin. The Barclays Capital Aggregate Bond Index is an unmanaged market value-weighted index representing securities that are SEC-registered, taxable, and dollar-denominated. It covers the U.S. investment-grade fixed-rate bond market, with index components for a combination of the Barclays Capital government and corporate securities, mortgage-backed pass-through securities, and asset-backed securities. The Barclays Capital U.S. Corporate High Yield Index covers the USD-denominated, non-investment-grade, fixed-rate, taxable corporate bond market. Securities are classified as high-yield if the middle rating of Moody’s, Fitch, and S&P is Ba1/BB+/BB+ or below. The index excludes emerging market debt. There is no guarantee that a diversified portfolio will enhance overall returns or outperform a nondiversified portfolio. Diversification does not ensure against market risk.