The elections are behind us

The results of the midterm elections are in, and the celebrations and concession speeches are behind us. The elections had been a significant focus for the financial markets, and the increasing discontent with partisan politics added to the burden of uncertainty regarding policy decisions. The polls did indeed indicate that there would be a movement to oust many incumbents and a shift to the right, a theme that was highly popular with the recently formed Tea Party. The financial markets can now digest what the changes in elected officials may mean.

In October, equity markets continued to drift higher, as the Dow Jones Industrial Average gained 3.21 percent for the month and the S&P 500 Index advanced 3.80 percent. Equity investors have likely seen gains in their portfolios, as markets have posted gains for two straight months. The Dow and the S&P 500 are up 8.96 percent and 7.84 percent, respectively, year-to-date.

International investors have also been rewarded, as the MSCI EAFE Index rose 3.61 percent in October. Earlier troubles with the Greek debt issues have kept year-to-date gains at only 4.72 percent. The biggest standouts, however, have been the emerging markets, up 2.91 percent for the month and 14.26 percent for the year, as denoted by the MSCI Emerging Markets Free Index. Emerging markets have been one of the better-performing asset classes, with investors appearing to be more comfortable with investing in riskier assets as of late.

Despite a slight rise in interest rates, the broadly diversified Barclays Capital Aggregate Bond Index gained 0.36 percent in October. That leaves the index up 8.33 percent for the year, ahead of the S&P 500 and only slightly behind the Dow’s gains year-to-date. This index has advanced for the past seven months and has shown positive returns for 18 of the 20 months since interest rates bottomed in March 2009. Investor appetite for risk was again strong in October, driving the Barclays Capital U.S. Corporate High Yield Index up 2.58 percent for the month and 14.41 percent for the year.

Isn’t the QE2 an ocean liner?

The government still dominated much of the agenda, not only because of the elections, but also because of its persistent intervention in the financial markets. Specifically, the Federal Reserve continued its rhetoric around pumping additional liquidity into the market through a program referred to as quantitative easing (QE2). This process involves the Fed electronically adding reserves to bank balance sheets in return for securities. It is designed to support economic growth and can essentially be described as printing money.

The Fed hopes that this added liquidity will be used for more lending by banks, which in turn should help to stimulate future economic growth. Markets have reacted favorably, though some analysts have expressed doubts as to whether the additional liquidity will indeed seep into the economy.

One of the Fed’s biggest justifications for QE2 has been the weakening economic recovery. Gross domestic product estimates for the third quarter showed the economy growing at a 2-percent annualized rate. This has not been sufficient to generate significant job growth; nonfarm payrolls reported a loss of 95,000 jobs in September, and the unemployment rate remains stuck at 9.60 percent.

Mixed news on the home front

Surprisingly, new home sales pushed higher, posting a 6.60-percent month-over-month gain in September; they are up 9 percent from the record lows after expiration of the homebuyer’s tax credit. Although this is good news, sales are still well below the levels seen before the housing crisis. Further clouding the picture are problems with the processing of foreclosures, which recently came to light at the nation’s largest mortgage lenders. It appears that documents required to pursue the foreclosure process have not been in order; a temporary moratorium on foreclosures has been put in place.

This clearly was not good news for the housing market, but it could actually boost new housing sales, which are not encumbered by legacy paperwork and processing issues. (Figure 1 illustrates the increase in home foreclosures across the U.S. in the past 10 years.) 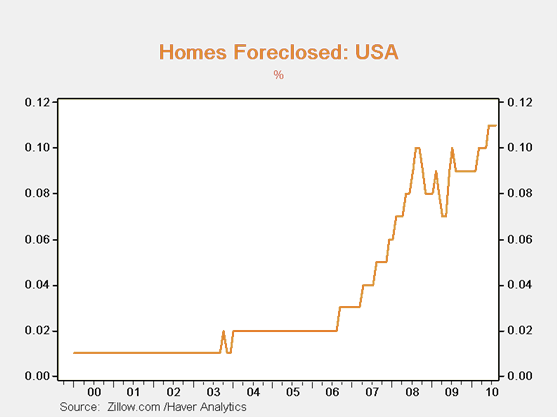 Markets and the “muddling along” economy

Even though the economy has apparently resigned itself to “muddling along,” equity markets have posted strong returns over the past two months. Initially, markets rallied on the back of the QE2 announcement, but a strong earnings season has also helped to fuel market gains. So far, more than 70 percent of companies have beaten analyst expectations, posting 30-percent year-over-year growth in earnings.

Companies have responded well to the downturn, shedding workers and improving operating efficiencies to grow earnings. They have also been looking at an increasing number of mergers and acquisitions and have been able to borrow at historically attractive levels. Unfortunately, however, because of the sluggish economy, some are finding it challenging to locate organic growth opportunities in this environment. But this, in many cases, has proven a plus for investors, as companies have been boosting dividends—a trend that is expected to continue for the foreseeable future.

Now that the elections are over, as noted previously, some of the uncertainty regarding the future direction of Washington politics has been reduced. The Republican takeover of the House may result in two years of gridlock and an environment of posturing until the Presidential election. This is typically seen as a positive for markets, and the third year of a presidency is also typically market-friendly. It will be interesting to see the actual outcome because markets and the economy may actually need leadership rather than gridlock at this critical juncture.

Disclosure: Certain sections of this commentary contain forward-looking statements that are based on our reasonable expectations, estimates, projections, and assumptions. Forward-looking statements are not guarantees of future performance and involve certain risks and uncertainties, which are difficult to predict. Past performance is not indicative of future results. All indices are unmanaged and investors cannot invest directly into an index. The Dow Jones Industrial Average is a price-weighted average of 30 actively traded blue-chip stocks. The S&P 500 Index is a broad-based measurement of changes in stock market conditions based on the average performance of 500 widely held common stocks. The MSCI EAFE Index is a float-adjusted market capitalization index designed to measure developed market equity performance, excluding the U.S. and Canada. The MSCI Emerging Markets Free Index is a market capitalization-weighted index composed of companies representative of the market structure of 26 emerging market countries in Europe, Latin America, and the Pacific Basin. It excludes closed markets and those shares in otherwise free markets that are not purchasable by foreigners. The Barclays Capital Aggregate Bond Index is an unmanaged market value-weighted index representing securities that are SEC-registered, taxable, and dollar-denominated. It covers the U.S. investment-grade fixed-rate bond market, with index components for a combination of the Barclays Capital government and corporate securities, mortgage-backed pass-through securities, and asset-backed securities. The Barclays Capital U.S. Corporate High Yield Index covers the USD-denominated, non-investment-grade, fixed-rate, taxable corporate bond market. Securities are classified as high-yield if the middle rating of Moody’s, Fitch, and S&P is Ba1/BB+/BB+ or below. The index excludes emerging market debt. There is no guarantee that a diversified portfolio will enhance overall returns or outperform a nondiversified portfolio. Diversification does not ensure against market risk.