It’s easy for the casual consumer of financial news to get lost in the sea of jargon that exists in most investment stories, including the complex language of the Federal Reserve.

In mid-October, Fed Chairman Ben Bernanke hinted that the Fed would resume their purchases of Treasury bonds. This plan started after the financial meltdown of 2008 and was given a name – “Quantitative Easing” – further nicknamed in 2010 as QE2.

But what is it, really? The answer lies in the situation where we now find our monetary policy.

As many people know, the Fed’s most reliable tool to speed up or slow down the economy is interest rates. They already have rates hovering slightly above zero. 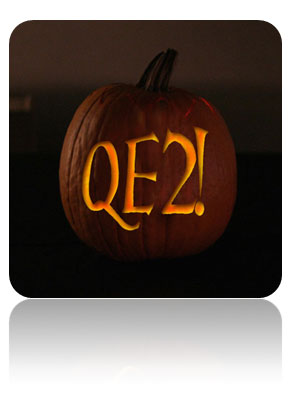 With rates this low, consumers normally rush to buy a new car with zero percent financing or refinance their mortgages.  On the business side, large companies tend to spend their capital by reinvesting back into their businesses instead of leaving it dormant in low yielding T-Bills.

This time, however, consumers are paying down debt instead of borrowing. Homeowners are finding it difficult to refinance their mortgages.  Meanwhile, big businesses are sitting on 1.8 trillion dollars in cash, even though they are earning less than .5 percent.

Simply put, low interest rates aren’t stimulating the economy like they normally do – and for good reason.

Unemployment is stuck at 9.5 percent, which raises concerns among individuals about their own job security.  In Washington, politicians vilify corporations over their efforts to make a profit, all the while new healthcare legislation is casting a fog over the business community, making it impossible to project future costs.

With these factors as a backdrop, Bernanke and the Feds are pursuing the course that Japan tried during their decade-long battle with deflation.

Imagine this hypothetical conversation among Bernanke and the Federal Reserve presidents:
“My esteemed colleagues – we tried cutting rates to zero, and other than Congress, no one is eager to spend money to get the economy moving. I’ve got a plan that I’m sure will work. They won’t spend their dollars because they are afraid of losing them, so why don’t we threaten to devalue their dollars?”

Another speaks up:
“Since big businesses are sitting on a couple trillion dollars, if we drive the dollar down, they will certainly spend it instead of watching it waste away.”

Another offers:
“But if we print a bunch of money, won’t that lead to inflation?”

Bernanke finishes:
“It would have worked in Japan if they printed more yen, faster. We can’t wait. Let’s do it.”

Here we witness “Quantitative Easing” – simply a euphemism for printing money. I have my doubts about how successful it will be. Real economic improvement requires an environment free of government smoke-and-mirrors. Until we reach that point, we all must keep a watchful eye on the growing pile of dollars that the Fed prints.

previous
October Market Commentary
next
What We Are Thankful For...