Youth athletics aren’t the same as my high school years in the early 80’s. Bob Cummings was my football coach then. Coach Cummings retired as an NFL coach with the New Orleans Saints and moved into teaching. When Beech High School opened, he was tapped to start our new football program. Within two years, our rag-tag group of players were deep in the High School playoffs. To achieve this fast success, Coach treated a bunch of high school kids like NFL players. His expectations were high, and we worked hard to meet them.

I played linebacker and since I played soccer, I handled kickoffs and field goals for the team. Instead of playing the safety on kickoffs like most kickers, Coach allowed me to use my kicking momentum to speed down the field and cover the ball. In one game during the season, I ran down after a kickoff and laid a heavy hit on the receiver who was running the ball back. As I jumped up to celebrate the contact, I noticed that my face mask was bent out of position from the force of the collision. I ran to the sideline and asked an assistant coach to help fix it. The look on his face told me that I had another problem beside a bent face mask. The assistant called over our team Doc who stared into my face and then turned to the coaches and players around me. “Yup, it’s broke,” Doc said. Coach Cummings replied, “Straighten out his face mask and get him ready to play. We don’t have another kicker. He’s gonna have to finish the game!” In all honesty, I was so full of adrenaline that the pain hadn’t yet registered, and I wasn’t the only player that had bumps and bruises. A large part of our team success was a result of our best players playing in and through pain. That’s what a retired NFL defensive line coach demanded of us and we weren’t going to let him down. 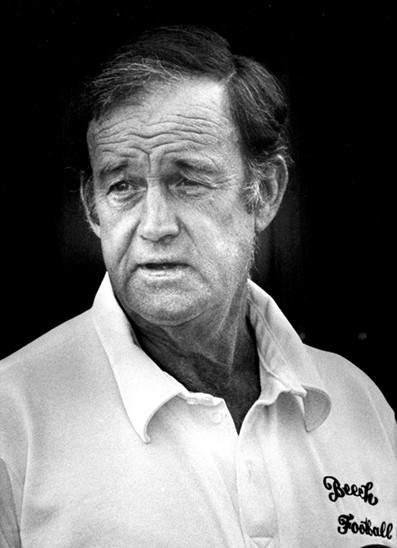 A rare mix of skyrocketing rates and the Russian conflict are turning up the volume on recession forecasts. The Fed intends to beat inflation into submission by slowing down our economy. Investors fear (for good reason) the Fed won’t be able to engineer a soft economic landing so the risk of an economic disaster is on every investor’s mind.

After getting hit hard in April, stock investors are pretty bruised up and we haven’t even made it to Memorial Day. In just the month of April, the S&P 500 Index dropped 8% and the NASDAQ dropped 13%. For the year, the S&P is down 17% and the NASDAQ is down 26%. That is a beatdown by any definition but here is the point – you gotta check yourself, fix your face mask and stay in the game. Change the lineup of your team (rebalance or reallocate to different sectors) if you need to, but stay in the game! Investors who learn to “play hurt” have equipped themselves to stay focused on their long-term goals when bad short-term results are disappointing. Learn to master the fear that percolates up when your portfolio takes hard hits and make sober decisions based on your long-term needs.

I can offer you a good historical reason to stay in the game and play hurt. The United States is undefeated against recessions. Our economy has recovered from every single recession we have faced. We have a perfect winning record.

previous
Change Ahead: What could a “SECURE Act 2.0” do for you?
next
The Money Talk