The setting: You are enlisted and serving in your country’s army. You are winning on the battlefield which is far from home. Your platoon has stopped to savor the victories and even enjoyed the Christmas holiday with all of the traditions that you love from home.

The moment: At 8:15 am on December 26th you are awakened by the sounds of an attack. In less than 2 hours, your camp is surrounded and your leaders, at least the ones who didn’t escape, are planning a peaceful surrender. Your captors are the very soldiers that you were dominating on the battlefield. 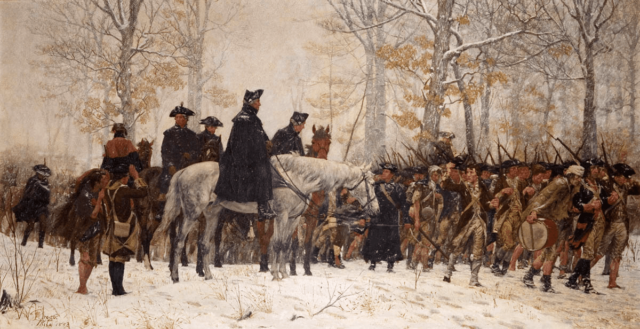 The realization: While your camp went to sleep, George Washington, General of America’s Revolution Army gathered 2,400 troops into boats to cross the frozen Delaware River. He also planned to have another 3,000 troops arrive with artillery from another direction. Caught unaware, General Washington is able to capture nearly 1,000 of your unit while only losing 4 American soldiers in the siege.

The regret: You underestimated your enemy. You lost focus on the job. Your loss wasn’t strategically significant (it was Trenton, New Jersey for heavens sake). Despite this as news of Washington audacious gambit traveled around it raised the spirits of the Revolutionaries. Your small loss was the turning point in losing the war.

Closer to home, the Federal Reserve raised interest ½% percent. Since it was telegraphed ahead of time, markets got what they were anticipating. Stock bounced back from the October lows and investors are stepping away to enjoy Christmas with their family.

Don’t fall asleep. Secular bear markets have a way of lulling investors into complacency. It is common to see counter-trend moves in stocks before the bear market forces reverse to new lows. In the 2 months stretch from June to August this year the S&P 500 jumped more than 17% only to roll over and lose 19% in the next 2 months.

Washington crossed the Delaware in 1776, He didn’t accept the British surrender until 6 years later in October 1781. The British finally pulled their troops from Charleston in 1782. Please realize that the financial skirmish with inflation in 2022 could turn into a 5 to 7-year global recession that leads to a lengthy bear market unwind. I’m not predicting this, but I am prepared if it unfolds.

As recession calls grow louder, you should consider what could happen in January. It sounds harsh but, as part of the Federal Reserve’s battle against inflation, officials have basically called for corporate America to fire folks. Flash back to January 2022, when Apple became the first 3 trillion-dollar company on the planet and enjoyed record profits. Imagine If the CEO held a press conference to announce their great results and ended the speech with. “And we’re laying off 5,000 employees.” The outcries of corporate abuse and greed would be deafening. Businesses wait for financial distress or economic “hardship” to provide cover to cut fat. That’s what the Federal Reserve provided to corporate CEO’s.

Thousands of layoffs have been announced but only a relatively small number of jobs have been eliminated so far. This will pick up steam in the new year. As layoffs are processed, companies will take a charge against their profits for severance and other HR related costs. As these charges cut into profits, investors will have new concerns to grapple with. If earnings forecasts get cut, stock prices will likely follow.

Stock investors are conditioned to think long-term and stay in the game. This works if you can stomach the large declines that may take years to recoup. If you are within 7 years of retirement, I suggest that you stay alert and avoid becoming complacent until we see a clear picture of our economy in early 2023. Be ready to reallocate to safer investments to avoid large declines like this summer.

Call us to schedule a sit-down in January. We use sophisticated risk analysis tools to help you understand what can happen to your retirement savings if we find ourselves surrounded by bears.

Surrender is not an option!

previous
Finish 2022
next
Grandparent-Owned vs. Parent-Owned 529 accounts – Recent Changes and the Future Impact on Beneficiaries